How fast is Spark? - A machine learning perspective

Photo by Arjun Kartha from FreeImages

Apache Spark has become the go-to technology for large-scale data analyses. It provides support for multiple programming languages such as R, Python, Java and Scala. Compared to R, Spark is impressively fast in loading and handling large datasets (~40 million observations with 14 variables), but there are only a handful of blogs benchmarking Spark and R with real world examples (I found a few here, here and here). None of these address the benchmarking in R from a machine learning point of view, and I am going to attempt to do that.

Apache Spark has its own R API called SparkR. A quick glance at Spark’s official Machine Learning documentation (MLlib) will tell you that few algorithms are not supported in SparkR. This is where the makers of RStudio come in, with their own R API called sparklyr. sparklyr bridges some of the gaps (you can read more about it here and here). In this post, I benchmarked two machine learning algorithms, random forest (RF) and linear regression (LR), on R, SparkR and sparklyr. For both algorithms (RF and LR), the aim was to predict the values of y.

I used the bench package which comes with a useful function called press. I won’t go into detail (more information can be found here), as it is better to demonstrate this with the sample code below (benchmarking RF and LR in R) -

One can think of press as two nested for loops, one for rows and one for cols. The benchmarking was done over 5 iterations of each algorithm. Algorithm parameters in R, SparkR and sparklyr were kept the same for a fair comparison.

I will break down the results for each algorithm separately, as results are quite different. The focus was on running time and memory used (y-axis) as the size of the data increases (x-axis).

This blog touched the surface of benchmarking 3 technologies (R, SparkR and sparklyr). It highlighted the advantages and disadvantages of these technologies in the context of machine learning algorithms and size of the data. When considering which technology to use for your analysis, it is wise to benchmark the algorithm(s) you would be deploying.

The following are the R packages and system information - 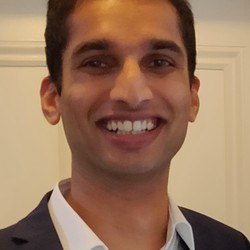 My research interests include application of machine learning to Big Data analytics, and teaching data science with R and Python.